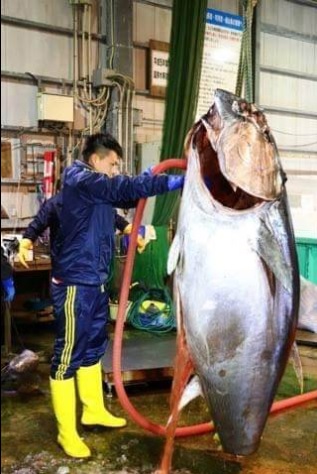 The famous Tokyo Tsukiji Market, which has now been relocated to the Toyosu District of Tokyo, just had their New Year Tuna Auction. This is when everyone bids crazy prices to get the most expensive tuna of the year.

And this year they broke another record, as the most expensive blue fin tuna sold for a whopping $3.1 Million Dollars! The tuna weighed about 278 kilograms (612 pounds), which is about $11,151 Dollars per kilogram. And, to no one’s surprise, this year’s top bidder was Kiyoshi Kimura, the President of the famous sushi chain “Sushi Zanmai”.

For those that don’t know Kimura-San, he is famous for bidding a lot of money for the first tuna each year. In fact, last year he came in Second Place, when he bid $271,429 for this beauty:

The tuna Kimura-San bought last year weighed 190 kilograms, which is small compared to the giant he bought this year. Last year, Kimura-San was a bit sad, since he had previously won the highest bid battle for the previous six consecutive years before 2018. Looks like Kimura-San is back on top this year!

And how much of a record is this? Well, it almost doubles the previous most expensive tuna sold in 2013. That blue fin tuna sold for about $1.8 Million Dollars! And who paid that much…..Kimura-San, of course!

Kimura-San was younger back then, but he had the same drive to be the top tuna bidder. New Year 2019 is starting great for Kimura-San, and all sushi lovers too.