Rakuten’s Japanese Marriage Match-making Service “O-net” recently released the results of a “Love Survey” they conducted about Valentine’s Day and White Day, and it looks like its getting harder and harder to find true love.

From February 15th to February 20th, 396 men and women (ages 20-34) filled-out the survey, which asked specific questions about gifts they received (or didn’t receive) on both Valentine’s Day and White Day–two of the biggest “lovey-dovey” days of the year in Japan.  The goal of this survey was to figure out whether romance exists in Japan.

So here are the results, with some of the cool pie charts and graphs to make everything look even more scientific and official.

About 5% of the remaining men “didn’t know” for some reason, and about 4% didn’t want to answer.

About 32.3% Of Women Gave Chocolate To Their “Lover” On Valentine’s Day 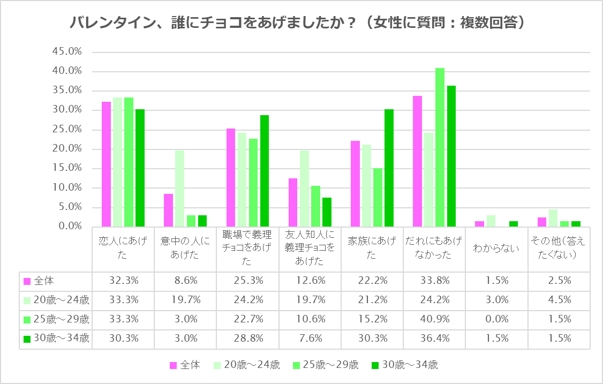 Also, some potential lovers may have been created this Valentine’s Day, as about 8.6% of women gave chocolate to people they “liked.” I hope they were “liked” back!

And it looks like we know why so many men didn’t receive any chocolate, because about 33.8% of women didn’t give chocolate to anyone.

But if you think that only women are giving chocolate in Japan, don’t worry, because on White Day (March 14th) men usually gift chocolate back to the women they received chocolate from! And about 62.9% of men plan on doing this.

Unfortunately, about 25.8% of the men said they would only be giving chocolate to “some” of the people they received it from. So there may be some sad people walking around on White Day.

And we sort of know what percentage of women may be sad for not receiving this chocolate, as about 38.2% said they did not expect to receive any chocolate on White Day. But still, 52.8% of the women expect that they will receive something, so there is still hope!

The most surprising number of all is that only about 10% of all men and women surveyed have experienced a “love confession” on Valentine’s Day or White Day!

Japan has this cool tradition of having men and women confess their love to the people they like by a “love confession”. Basically, just giving that special someone a box of chocolate (or other nice gift) and then declaring that you really, really like them! It’s in all of the Japanese manga and anime, so I’m sure you’ve seen it before. And Valentine’s Day and White Day are days when men and women are supposed to get an extra boost of courage to do this. Sadly, it doesn’t seem to happen very often in real life.

About 50% Of “Love Confessions” Are Successful

But if you are one of the lucky people who do receive a love confession, then you have a 50/50 chance of ending-up in a successful relationship with that person. That might not seem like the best odds, but no one ever said love was easy.

I hope these numbers give everyone some insight on the realities of giving and receiving love and chocolates on Valentine’s Day and White Day, but remember, these are just numbers. Don’t let anything stop you from reaching your goals, and declaring your love to those you want to be with!