The battle between Ichigo and Yhwach has begun, and it seems that Ichigo may be in for a hard fight. Yhwach is barely about to stand, and Ichigo has already been thrown across the room.

But Ichigo is not the type of person to stay down, and he quickly charges back at Yhwach—which probably isn’t the brightest idea, seeing that Ichigo isn’t really getting anywhere near Yhwach.

And so, Ichigo lunges at Yhwach over and over again, but he is simply pushed back by Yhwach’s power. All the while, Yhwach reminds Ichigo that the power he possesses belongs to Yhwach, and that he should be more respectful of his status as a tool for Yhwach.

We are then taken back to Renji and Rukia, who had arrived at the fight between Captains Zaraki, Hitsugaya, Kuchiki, and Sternritter Valkyrie. But as they begin to get involved in the battle, Captain Kuchiki stops them.

Kuchiki tells Renji and Rukia to go meet with Ichigo, and both are surprised to hear this. Kuchiki tells them that he simply does not “need them” there, which is actually his way of saying that he does not want them to be in danger. 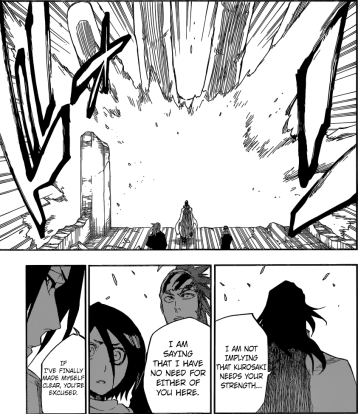 Both quickly understand that Kuchiki is watching-out for their safety and thank him. It is amazing how much Kuchiki’s heart has softened since the first time we met him, and I think this has made him stronger.

Kuchiki would like both of them to be safe, but Hitusgaya reminds him that the will not simply stand back and watch Ichigo fight—because they are Ichigo’s close friends.

And now, we return to the fight between Ushida and Haschwalth, and we find Ushida thrown on the ground. 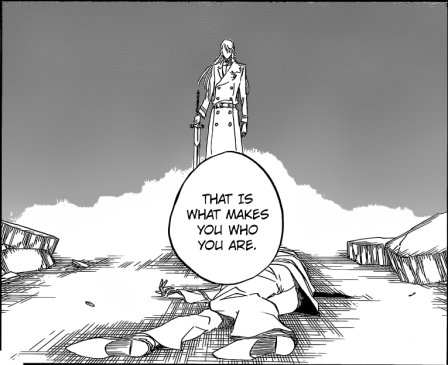 But Ushida and Ichigo are very alike, because he will not stay down either. Even though the odds are against him, he rises once more, ready to fight until the death.

And then we see a portal pendant fall to the ground, and here two old friends talking about how surprised they are the portal still works. But who is it? It’s Ryuken Ishida and Isshin Kurosaki!

Things are getting even more interesting, as it seems the veterans are now entering the battlefield to join their sons! I’m excited to see what cool tricks these two have, because they have been around a very long time and know secrets that others don’t.

So make sure to tune-in next time to see what twists the battles will take, and thank you for visiting JapanSauce.Net!