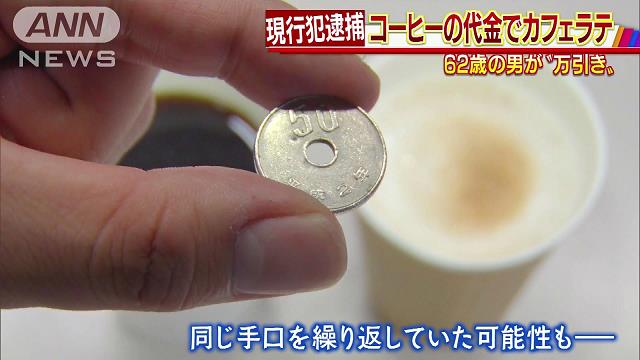 As reported by Japanese news outlets, a man was arrested on suspicion of stealing 50 yen ($0.50 US Dollars) worth of coffee. Here is what happened.

Most Japanese convenience stores have self-serve coffee machines, to make it convenient for customers to buy a cup of coffee on-the-go. Customers will pay the clerk the correct price for the coffee they want to get, and then they are allowed to go get their coffee on their own. It is based on the honor system. In other words, you are expected to get the coffee that you paid for. Well, one Japanese man decided to pay for the 100 yen coffee, but then tried to fill his cup with the 150 yen caffe latte. But an eagle-eyed clerk caught him in the act.

And so, the Japanese man was arrested for shoplifting 50 yen worth of coffee. Now I know what your are thinking, is 50 yen really worth an arrest? Well, the police think that this guy may have done this more than once, which could result on a much larger shoplifting charge. In fact, one of the other clerk recalls that he had done the same thing a few days before.

Moral of the story, don’t steal in Japan!