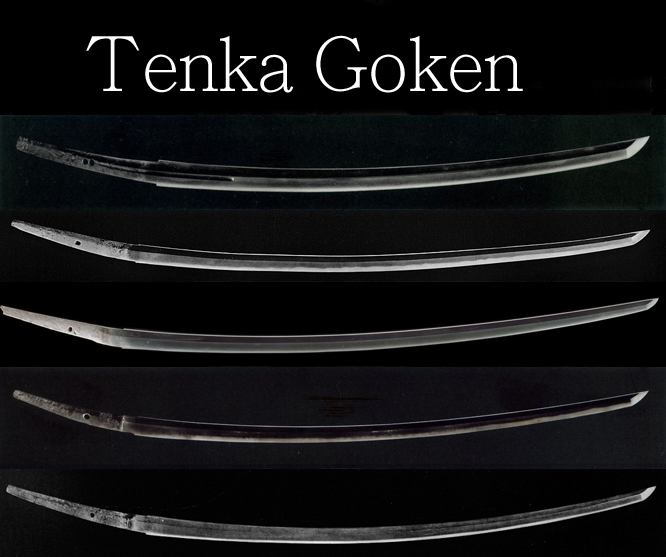 Today, I wanted to talk about the top 5 most unique and special swords in Japanese history. The Tenka-Goken or “Five Swords Under Heaven”.

These five swords are considered to be in a class of their own. Three are National Treasures of Japan, one is an Imperial Property, and one is a holy relic of Nichiren Buddhism. Please enjoy the following video about these swords, and make sure to read on to learn more!

The Tenka-Goken consists of the following five swords:

The first sword we will speak of is the “Onimaru” or “Demon Sword.”

This sword was made by the swordsmith Awataguchi Kunitsuna. Legend says Hojo Tokimasa, head of the Hojo Clan, was having dreams of being tortured by a demon. One night, an old man appeared in his dream, claiming to be the personification of the sword. The sword was rusty, and the old man promised Tokimasa that it would get rid of the demon if Tokimasa would clean the sword. Tokimasa quickly cleaned the sword. Then the sword, moving and falling on its own, sliced the neck of a demon that was engraved on a pot. From that moment, Tokimasa no longer had bad dreams of the demon, and the sword received its name. Onimaru—the Demon Sword. 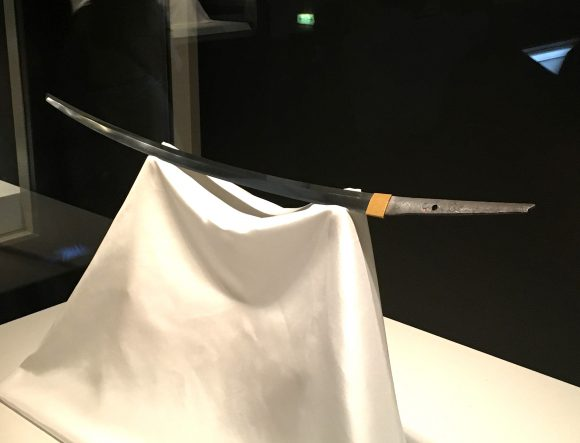 Next, we have the “Mikazuki Munechika” or “Crescent moon” sword. This is said to be the most beautiful of the Tenka-Goken.

The sword was made by the famous swordsmith Sanjo Munechika. When Munechika made this sword, crescent moon patterns appeared on the hamon as a result of the tempering. It is a National Treasure of Japan, and is housed in the Tokyo National Museum.

Now we will speak of the “Odenta” or “Great Denta” sword.

This sword was made by swordsmith Miike Denta Mitsuyo. Legend says that Maeda Toshiie, one of the leading generals of Oda Nobunaga, had a daughter named “Go” who was always a sickly child. One day prior to her marriage, she became very ill. Toyotomi Hideyoshi, owner of the Odenta, offered Toshiie to borrow the sword to defend against the evil forces afflicting Go. Toshiie accepted and placed the sword next to Go’s bed, and Go’s sickness went away. When Toshiie attempted to return the sword to Hideyoshi, Go became sick once more. The pattern continued three times, until Hideyoshi said that it would be best for Toshiie to keep the sword. And he did.

The next sword is the “Juzumaru” or “Rosary” sword.

This sword was made by swordsmith Aoe Tsunetsugu. It is said that Nichiren, a Japanese Buddhist priest, was presented with this sword for his protection. But Nichiren saw the sword as a symbol for the “destroying of iniquity and establishing righteousness”, and so he hung a Buddhist rosary or “Juzu” over the hilt. Thus the name Juzumaru was born.

And standing at the pinnacle of the Tenka-Goken is the “Dojigiri” or “Slayer of Shuten-doji”. Many regard this sword as the Yokozuna of all Japanese swords.

This sword was made by swordsmith Hoki-no-Kuni Yasutsuna. Legend says that the Demon King Shuten-doji had been terrorizing the area north of Kyoto, and the Emperor requested the help of Minamoto no Yorimitsu, also known as Minamoto  no Raiko.

Yorimitsu took his four generals, the so-called shitennō, and set out. The party was joined by another person and all six climbed up the path disguised as Buddhist mountain disciples. During the climb they came across three old men who – as it turned out later – were actually disguised Shintō gods. The old men gave them three magic items: a helmet, a rope, and a bottle of wine.

When they reached the top of the mountain, Shuten-dōji held a huge banquet for them. They were served meals of human flesh and blood. But they tried not to get exposed and thus ate the horrifying meal. At the end of the “dinner,” Yorimitsu offered Shuten-dōji and his demons some of the wine they brought.

Soon Shuten-doji fell asleep, and he was tied up, and Yorimitsu and his men started to kill the demons. When Shuten-dōji was decapitated by Yorimitsu, his head flew through the air and tried one last time to bite Yorimitsu in the head, but the magic helmet withstood this demonic attack.

And so the sword with which Yorimitsu killed the demon got its name dōjigiri the Slayer of Shuten-doji. And today it designated as a Japanese National Treasure.

Most sword enthusiasts agree that these five swords are the most important swords in Japanese history, so I hope you enjoyed learning more about these swords and their legends.