Japan is known for many cool things, like its amazing food, tons of anime and manga, and having some of the most convenient and cute trains! And now, Japan has added a train that looks like a fish. 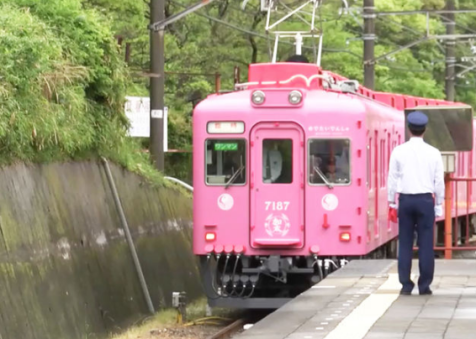 On April 28, 2016, Nankai Electric Railway Co. introduced a train that is themed on red sea bream, known as the Medetai Train (“tai” means red sea bream in Japanese). The train will travel along the Kada Line, and residents near Kada Station in Wakayama were the first to see it.

Here is a short video of the colorful train:

The Medetai Train is part of the Kada Line Project, meant to promote the railway, which operates in an area where fishing is a major industry. And of course, red sea bream is one of the main fish that can be found here—so it’s a great choice! Here is a pic of a red sea bream, so you can see the inspiration (FYI, that’s not me, haha).

The train is bright pink, with scales and eyes painted on the side. Inside, the train has colorful pink and white seats with fish designs, as well as train handles in the shape of fish too. You can see all the cool fishy designs in the video above.

If you want to ride this colorful train, then head down to the Kada Line in Wakayama since it is already operating!

One thought on “Fish Train in Wakayama!”