崖っぷちホテル！(Hotel on the Brink!) began airing on Nippon TV last week, and here is a summary of the First Episode–in case you didn’t get a chance to watch it yourself.

If you haven’t read the general summary of this show, then you should read our show summary here: 崖っぷちホテル (Hotel On The Brink!) New Japanese Drama! But the very short summary is that the Gakeppuchi Hotel is a Portugese-styled hotel that is quickly going to be closed-down and bankrupt, due to its many problems with staff and money in general.

And this is how the show begins, by showing a hotel in complete disarray. Guests are roaming around in their bathrobes, the staff is lazy, clumsy, and very inattentive, and no one seems to want to help Sana Sakurai, the General Manager of the hotel. It’s easy to see that if things continue, she is headed to a sure defeat–something she wants to avoid with all her heart, since her father used to run the hotel before he died.

Enter the stranger,  Naoya Ukai, who seems very sloppy and without a care in the world. He tried getting a room when he arrived, but everyone ignored him. So he eventually fell asleep in the lobby.

When Sakurai fails to wake him up she begins thinking of her problems out loud, but soon realizes that Ukai has actually been awake the entire time and listening to her. Then Ukai declares that he would like to reserve the “Por Do Sol” suite (Portuguese for Sunset, this is important to remember). This is the most expensive suite in the hotel, so everyone is shocked that this stranger is willing to spend that much money.

The questions continue when the clumsy bellhop, Pierre Tanaka, drops Ukai’s luggage, revealing some kid toys and a large stack of memo cards. Ukai then asks Tanaka to bring him a strange list of items. 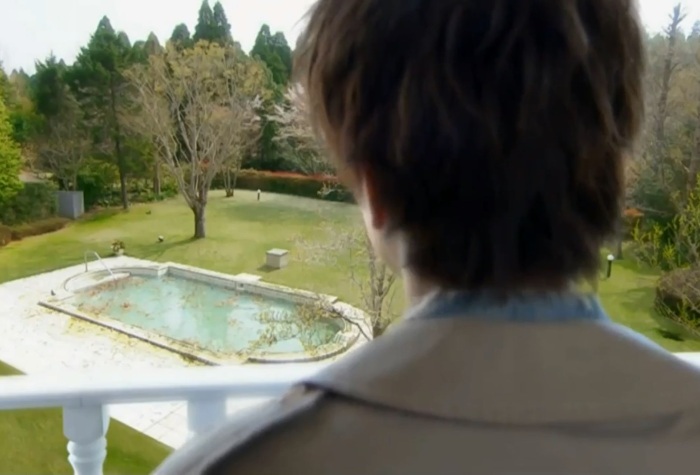 As Ukai begans examining his room, he walks onto the balcony and sees a very, very dirty swimming pool outside. He stares at it for a while, but doesn’t say a word.

But a drama wouldn’t be interesting without some suspicious, villain-types, and that role is taken by the sultry bartender Kozue Edagawa and the sneaky Staff Manager Masao Tokisada. Both some intent on watching the hotel fail, and are happiest when things are going bad.

During the time Edagawa and Tokisada are gloating about the hotel’s failure, Sakurai is trying to figure-out what she can do to turn things around,but she sees little hope. Pondering what went wrong, as she gazes at a picture of her father.

And the staff continues to be confused by the stranger, as Tanaka tries to ask cleaning staff Naomi Yoshimura and Nagayoshi Abe for help understanding the stranger’s list–offering some comic relief by the way they argue with each other. Tanaka is providing some great physical comedy, and I think he is doing a great job already. 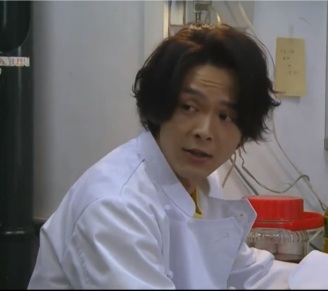 We also meet current Head Chef Haru Horai, who seems enthusiastic about making some delicious food for the stranger–she appears pure and innocent. And working with her in the kitchen is former Head Chef Ryuji Eguchi, who is disillusioned with his work now, and prefers to read newspapers and listen to the radio–offering Horai minimal help with the food.

During this short break from the main story we also see the creepy butler (of course!) Yozo Hattori, who seems to appear right next to people in the blink of an eye! This is just a necessary part of any hotel, right? I realy enjoyed the way Hattori just appears behind people, causing them to freak-out each time.

But back to the main story, Sakurai goes to check on Ukai, and after a short while Ukai asks Sakurai for a favor. He would like her to clean the swimming pool, and that it should only take 3 hours! Sakurai states that its not summer yet, but Ukai inists. Of course, Sakurai is a people-pleaser,  so she agrees to clean the pool–though she doesn’t really want to.

Next, a grandmother and her grand-daughter arrive at the hotel, and stay in the “Portugal” suite–next to Ukai. The staff mentions that it has been five years since she had visited the hotel, though they notice that the grandfather is not present.

The grand-daughter knows that the grandmother is sad, and she doesn’t understand why they had to come to a hotel that would make her grandmother feel depressed. That grandmother tells her that everything is fine, but she is sadly looking at the dirty pool.

Meanwhile, Sakurai asks some of the staff for help cleaning the pool, but no one wants to spend 3 hours trying to clean it. So Sakurai is left to clean the pool by herself. As the grandmother is eating dinner with her granddaughter, she sees Sakurai’s hard-work.

And Sakurai’s hard work pays off, as after 3 long hours of work, she was finally able to finish cleaning the pool. Of course, Ukai shows-up just as Sakurai finishes, and is happy to see that the pool is now clean. Sakurai tells him that the pool is now ready to use, so he should feel free to jump-in. But Ukai declines, and simply states that the water is too cold for a swim–leaving Sakurai confused as to what the purpose of cleaning the pool was. As Sakurai walks away, Ukai simply looks at his watch, and then back at the sun–as if waiting for something. 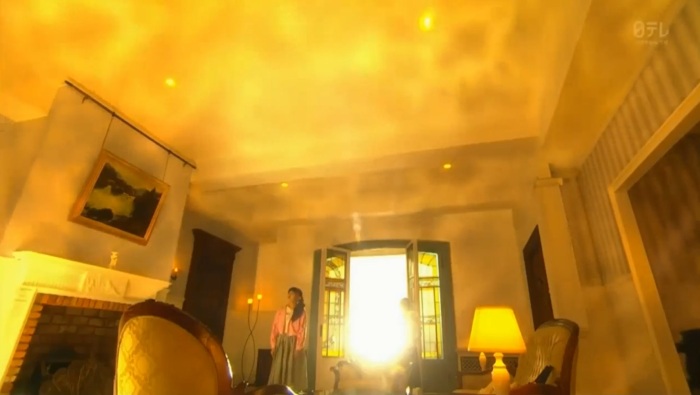 But suddenly, as if someone flipped-on a switch, beautiful reflections of the sun’s rays bounce off of the pool, creating a beautiful display of dancing lights all over the hotel suite. And its not just their room, as Sakurai’s office, and the bar too, are also engulfed in this beautiful display. The grand-daughter can only stare in wonder and exclaim how pretty it is.

The grandmother then explains that her husband (who appears to have died) brought her to the hotel 5 years ago, and they enjoyed this beautiful display together too. To her, this is the memory she wanted to experience again. She wasn’t trying t be sad. She was waiting to be happy again. The grandmother also explained that this event is known as “Por Do Sol”, which is Portuguese for “Sunset”. I told you this would be important!

And then it all made sense to Sakurai. The stranger had asked her to clean the pool, not because he wanted to swim, but because he somehow knew that the pool needed to be cleaned to allow this beautiful event to happen.

And as the grandmother and grand-daughter leave the happiest they have been in a long-time, the rest of the staff stumbles upon the identity of the stranger Ukai. He is the Vice President of a very famous Paris Hotel! They are shocked, and also worried that he may speak badly of them to others–I mean, they weren’t really doing a good job.

Realizing that everyone know who he is, Ukai simply tells them that he came to the hotel because he wanted to see it again. However, he bluntly tells everyone that they didn’t do a good job at all, and that it was too bad that it wasn’t the same hotel it used to be. The staff are depressed upon hearing this. 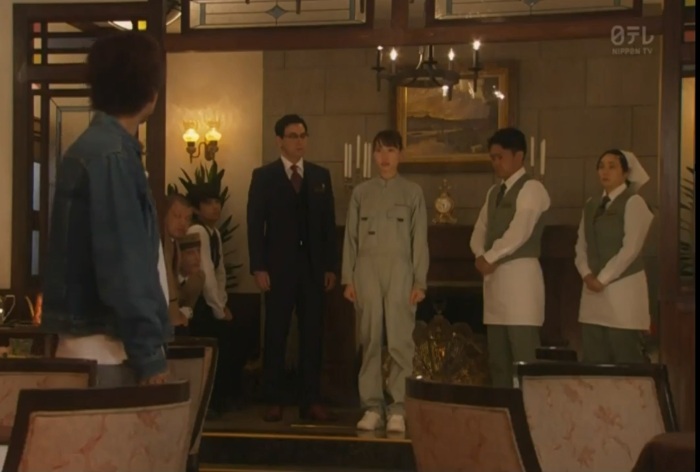 As Ukai begins to leave, Sakurai tells him to wait. She says that it is true that the hotel is not the same as it used to be, but that she still believes that her team is a group of good people. She defends them, even if they didn’t help her before. She assures Ukai that she and her team can do what it takes to make things better.

Ukai is inspired by Sakurai’s words, and suddenly proclaims that he will stay at the hotel to help them bring the hotel back to its former grandeur. Of course, everyone is shocked, but Sakurai is grateful for his help.

And that’s it! They placed a lot in the first episode, but it was necessary to set things up for the rest of the show. Overall, I was happy with the drama. I laughed, I was moved, and I’m interested in seeing the next episode. So yeah, I think I’ll be watching this show each week.

I’ll see you next time with a review of Episode 2!