Hello everyone we are back with more Dragon Ball Super episodes, so let’s jump right in it.

In this week’s episode we find Goten and Trunks on the planet Potaufeu , where a magical water is said to increase a person’s power by 100-fold if drunk. This special water was being safeguarded from invaders seeking its power by Potage–planet Potaufeu’s last remaining inhabitant.

Gryll ,an evil intruder, and his cohorts managed to unlock the seal and release the waters power. Though unknowingly, they were instantly absorbed by the reddish purple liquid and stripped from all their powers to re-create an evil incarnation of themselves.

In the meantime Vegeta and Jaco were sent by Bulma to retrieve both Goten and Trunks from the planet Potaufeu. It was a good thing too, since Trunks and Goten were saved in the nick of time by Vegeta. Unfortunately, Vegeta was absorbed by the magical liquid and stripped of all his powers. The Copy-Vegeta–that now has all of Vegeta’s power and is being controlled by Gryll–was ordered to absorb Trunks and the others.

Thanks to Jaco’s use of his laser gun, they were able to escape. Potage reveals that he and his people were the ones who created the Superhuman Water, “Commeson”, to save their planet from evil invaders. They meant for the Commeson to be a weapon of self-defense–a way to absorb and neutralize the enemies power–but the liquid has an immensely endless capacity and sought more power. Eventually it produced exact copies of its enemies along with their evil will, which in turn developed into an evil will of its’s own. So in order to save Potaufeu and the entire universe from being destroyed the inhabitants of Potaufeu sacrificed themselves to seal Commeson. And Potage has kept it that way for more than 100 years, until now! He also reveals that the person absorbed by the Superhuman Water will die in 3 to 5 minutes. So in order to save Vegeta they must defeat his Copy which has all his capabilities, skills, and power.

So Goten and Trunks decide to use fusion and become Gotenks in order to have a fighting chance. But even after powering up to Super Gotenks 3 they are still no match for Copy-Vegeta.

Meanwhile we find our hero Goku training at King Kai’s place, nearly destroying everything and eating everything as well. Feeling Gotenks and Copy-Vegeta’s energy in combat, Goku uses instant transmission to stop the fight and is informed by the real Vegeta of what’s going on.

The Copy-Gryll orders Vegeta to absorb everyone, but Copy-Vegeta refuses and knocks him out. So, now knowing the situation, Goku and Copy-Vegeta are set to fight. 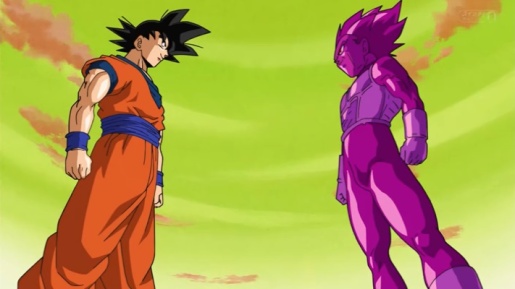 Goku must defeat Copy-Vegeta within 3 minutes if he is to save everyone. But it’s not going to be easy, since the Copy-Vegeta has all of the power and spirit of the real Vegeta–who would like nothing more than to defeat Goku once and for all.

Wow, what an episode this one was! We got to see one of my favorite characters, Gotenks, in the picture and bust out some wacky crazy super hyper moves that he’s known for so that was a great inclusion to the episode. We saw Goku training still at King Kai’s place like old times and eating everything as usual which was funny and cool. But best part was the showdown about to commence between the universe’s greatest powers Goku  vs Vegeta. Next week’s episode will resume the fight between Goku and Vegeta and it’s going to be an epic one indeed just like old times. So make sure to tune in next time to see the result!