Today’s chapter starts with Renji and Rukia arriving to see a giant Valkyrie, as the fight between Captains Zaraki, Byakuya, Hitsugaya, and Valkyrie wages on.

Suddenly, everyone stops, as they sense Ichigo’s power.

Ichigo and Orihime have arrived in front of Ywhach.

Yhwach is pleased to see Ichigo, and can see that he has awoken his true power. 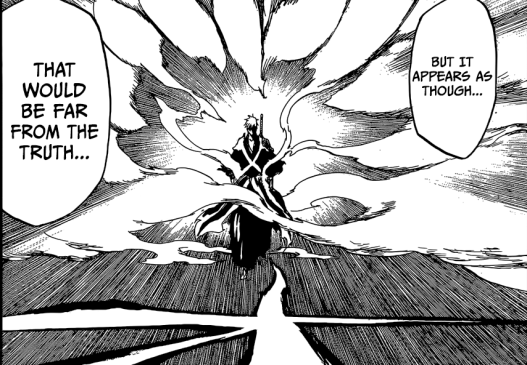 Yhwach speaks to Ichigo, and tells him that it is nice that father and son can meet again. Ichigo quickly reminds Yhwach that he is not Ichigo’s father.

Yhwach claims that killing Ichigo’s mother was necessary, and is of little importance. This quickly enrages Ichigo and the fight begins!

Ichigo does not waste any time, and quickly launches into his Getsuga Tenshou!

But Yhwach is not even fazed, continuing to sit on his throne. Clearly, Yhwach has some terrifyingly awesome power.

Yhwach does not want to waste any more time with Ichigo, and decides that he will reveal his true power. As he slowly rises, all of his power begins to reveal itself. And the chapter ends.

Wow! At this stage, it seems that Ichigo may be severely out-matched by Yhwach. I mean the guy took Ichigo’s most powerful attack without even standing up! I wonder how powerful he really is. Well, tune-in next week so we can find out together!