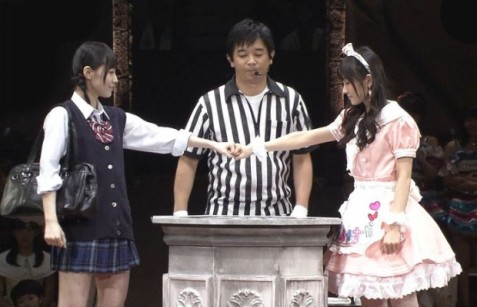 At this year’s Niconico Chokaigi 2016, one of the activities for the attendees was a game of Janken with a robot. There was a very long line for the game, and it reminded us of just how immensely popular this game is in Japan.

Janken (じゃん拳 janken) is the Japanese version of Rock-Paper-Scissors, but it is much more than a simple game in Japan. Janken is used to decide almost any conflict in Japan, as it is a very peaceful and fair way to make a tough decision.

Japanese people use Janken in all different types of situations:

But it is also used to decide much bigger decisions, like which one of the AKB48 members will get to have her own music single.

First, let’s learn a few words that are used in Japan:

Great! Now that you know the magic words, let’s go to the rules. The rules are pretty-much the same as Rock-Paper-Scissors in the U.S.: 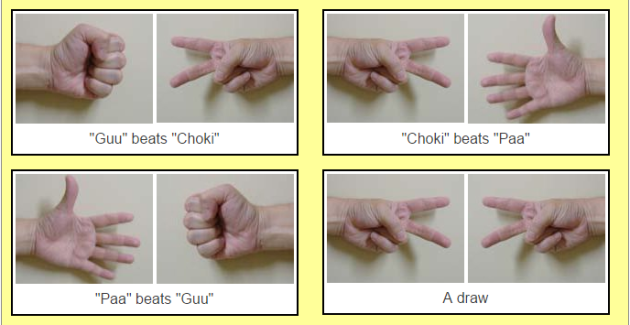 However, in Japan there is also a special ritual that is performed when playing:

Here is a video of people playing Janken:

One of the most famous games of Janken played in Japan is the AKB48 Janken Taikai (AKB48 Janken Tournament), where the winner is chosen to be the center for the new AKB48 music single. For those that don’t know AKB48, or Akihabara48, they are the most popular Japanese Idol Group in Japan, with over 41 Million records sold. So yeah, this is serious business.

Here is a video of an AKB48’s Janken Taikai, which is usually held at Tokyo’s Nippon Budoukan:

And of course, we cannot talk about Japan without talking about the cool robots that they invent, including a Janken-playing Master. The University of Tokyo invented a robot that can always win in a game of Janken. But how? Well, it uses a high-speed vision camera to read the opponents moves first, and then quickly throws the move that can beat it. Now that’s smart! Here it is in action:

So the next time you have a hard decision to make, channel your inner-Japanese and decide with a game of Janken!

One thought on “Janken–Japanese Game of Warriors!”