Last week we left off with the fight between Valkyrie and Captain Zaraki, and this week that fight wages on.

And so the battle continues, but then Captain Hitsugaya attempts to help Captain Zaraki and tries to interfere.

Captain Zaraki does not allow this at all, as this is his battle.

So Captain Hitsugaya plans to attack Valkyrie as soon as there is an opening, and asks Captain Kuchiki for help too. They agree.

In the meantime, Captain Zaraki is slowly losing to Valkyrie, because it is impossible to fight without damaging Vakyrie’s enormous sword. 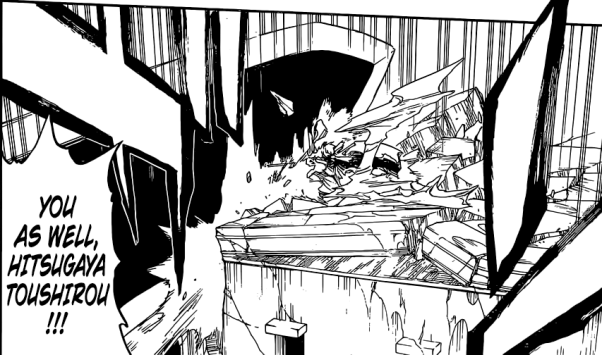 All seems lost. But then Captain Kuchiki hears a voice. 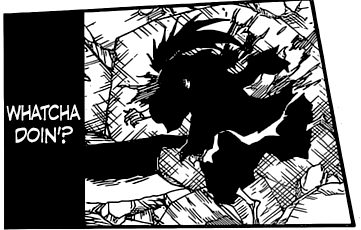 And Yachiru is there to tell Captain Zaraki that he is just getting started. Then she tells him that no one would be able to stop him, if only he would use her properly.

Use…Yachiru…properly…….!? Yachiru holds Captain Zaraki’s hand, and a power flows into him.

What is this power? Can it be? Will our predictions come true?

YES!!! Yachiru tells him the power is what everyone calls BANKAI.

At last! After all this time, Captain Zaraki will finally use his BANKAI!!! And just as we predicted, Yachiru seems to be a manifestation of his sword and bankai. This is similar to the arrancar Coyote Starrk and his other-half Lilynette Gingerbuck.

But what will Captain Zaraki’s Bankai look like? How much power will he have? As it is, Captain Zaraki has always had monstrous power, so I am freaking out just thinking about how much god-like power his bankai will give him. Think about it. He was so powerful that his sword and bankai became Yachiru—an entirely different person with her OWN SWORD!? That’s ridiculous.

Next week is a must read episode for any true Bleach fan. I cannot wait until next week. This is why I read Bleach. This is why we all love manga.